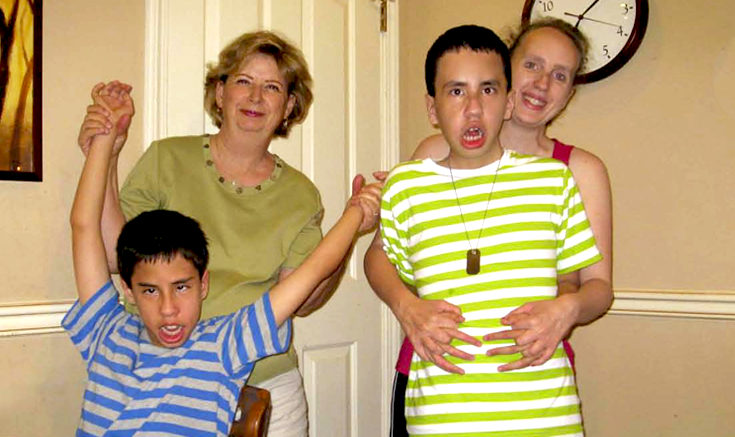 “Our family’s story begins when my undiagnosed daughter, Danielle, almost died giving birth and one of her twins had an initial APGAR score of zero. That was a pretty dismal beginning.” This is how Cecilia Stearns started the conversation when we asked her to share her family’s story with us. Though their journey has been bumpy, and at times scary, Cecilia, Danielle and the twins, Matthew and Jonathan, are finding their way by seeking out the support and services they need and learning to take life one day at a time.

“My advice to people with a child who has congenital myotonic dystrophy would be ‘do not assume that your child’s difficult beginning is a reliable indicator of what lies ahead,” Cecilia says. “The twins will be teenagers this year and my daughter is still here to tuck them in at night. There’s no upside to thinking the worst. Being able to adjust is the best thing anyone can do. Educate yourself, find the best doctors and support. And don't let the disease become all there is in your life.”

Danielle has DM type 1 and Matthew and Jonathan were born with congenital myotonic dystrophy. Cecilia and her husband, who are semi-retired and self-employed in Silicon Valley, have relinquished the typical “golden years” to care for their daughter and grandsons, which they have been doing for the past 12 years.

While in the hospital with her daughter for the birth of the twins, Cecilia was asked to leave the O.R. where Danielle was undergoing a C-section. “I was told they were trying to save my daughter’s life and that she was hemorrhaging, but I had no idea what was going on. It wasn’t until later that I found out she had a pregnancy complication called placenta accreta. When the twins were born, Matthew was not breathing and was immediately intubated and given chest compressions. It was several minutes before his doctors were able to bring him back. They saved his life.” says Cecilia.

The early years were challenging. The family had no idea that Danielle was living with DM. Her symptoms appeared during her early teen years and only became life threatening during labor. “In retrospect, it all makes sense,” Cecilia says. “Danielle’s adolescent symptoms were basically central nervous system problems rather than physical ones. She had some social problems, daytime sleepiness, learning problems, and personality issues, all of which we now know are associated with juvenile onset DM. Nothing seemed severe enough that we felt compelled to pursue a medical diagnosis,” Cecilia explains.

Danielle saw family counselors, tutors and all types of specialists, but the family considered her issues a matter of personality, not physical health.

“Many people have no idea that DM is genetic. Oftentimes symptoms don’t appear until adolescence, as they did with Danielle, or later in adulthood,” Cecilia continues. Danielle had inherited DM from her father, Cecilia’s first husband, who was asymptomatic. “This is why DM is such a mysterious disease. There is a potpourri of symptoms and varying ages of onset -- and it doesn’t affect anyone exactly the same way.”

After Danielle left the hospital, everyone was in survival mode. “We were in shock,” says Cecilia. “After 50 days in the NICU, both twins were home and their nursery was filled with oxygen tanks and sensors, kangaroo pumps, and heart monitors. The only thing on our minds at that time was making sure the children survived and remembering how to use all the equipment.”

Eventually, the family settled into a routine. Armed with a diagnosis and the determination to get educated, Cecilia transitioned from survival mode to proactive mode. She wanted to learn as much as she could and find some form of support: a community.

Around 2006 Cecilia found Lisa Harvey's Yahoo support group for parents of children with congenital and juvenile onset DM. “She was my life support back then and we remain close friends,” Cecilia remembers. Cecilia still remains active in the Myotonic community by offering support, tracking research and attending support group meetings.

The boys are still very needy. At age 12, they’re still in diapers and Jonathan cannot speak words, though he does find ways to communicate. Matthew is learning but he’ll never be a strong speaker, according to Cecilia. “I still find it amazing how differently congenital myotonic dystrophy has affected our fraternal twins. Matthew is very mellow and he is the hugger of the family. Jonathan is very autistic-like with sensory and behavior issues. After a two-year struggle, we managed to get him placed in an autism program where he is doing well. Sometimes it pays to be the squeaky wheel.”

Danielle’s symptoms have progressed slowly. She has extreme gastrointestinal issues, daytime sleepiness, and has difficulty going up stairs. Her hand grip has weakened and she has occasional muscle cramping but she’s still mobile on her own. Despite all that, Cecilia feels lucky. She feels they have the best care possible with their neurologist, Dr. John Day, Stanford Professor of Neurology, Pediatrics, and Pathology, who heads up the integrated Lucile Packard Children’s Hospital, Stanford Hospital, and Stanford University Neuromuscular Program. “It can't get any better than that,” she says.

“People ask me, ‘How do you do it?’ but I don’t feel special,” Cecilia concludes. “You just do what you have to do. We’re all here and doing as well as we can. The typical retirement does not exist for us, but we’ve got our daughter and two 12-year-olds who need us. We get so much love in return and I can’t imagine my life without them. I keep in my office a picture of Matthew when he was in the NICU. There’s a jumble of cords covering his tiny body. Above it, I have his latest school picture. To me, that is the ultimate picture of hope.”

When the COVID pandemic hit two years ago, I thought it might be worthwhile to have a special virtual support group for older adults with DM1. Many in-person and online support groups are open to adults with DM as well as their family members. I wanted to limit the membership to only those with the condition. In December of 2021, the monthly DM1 Over 50 Zoom group launched.