The Childress Family: Coping Through Teamwork 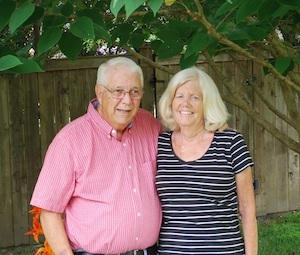 When Mary Childress was in her thirties, she’d wake up in the morning with her hand clutched in a very tight fist. “I’d have to use my other hand to pry my fingers open, and it was painful to do it,” she recalls 30 years later. “I never mentioned it to my doctor. I just thought it was just some kind of strange quirk I had.”

In her forties, Mary became unable to lift her head when she was lying flat, a condition that she and her husband, Ed, attributed to her chronic bad back. Then she began tripping when climbing the narrow staircase in a friend’s home. Ed began to get very concerned. “Is it normal to fall going up the stairs?” he asked.

Finally, in her mid-fifties, Mary shared this constellation of symptoms with her primary care doctor, who sent her to the neurologist Mary still sees today. When an EMG test of Mary’s muscles produced the characteristic sound associated with myotonic dystrophy (DM), the neurologist pronounced herself 99 percent sure they’d identified the cause of Mary’s pain, weakness, and stumbling. “I want do a blood test to be sure,” the doctor told her.

DM in the Family

Mary and Ed Childress are a team. They met at 14, married at 19, and have been deeply dependent on one another since. Ed worked in defense systems for the federal government for years, and Mary worked in billing in a doctor’s office. The couple, who are now retired and live in Chesapeake, Virginia, have two daughters—Tawnya, 43, and Amy, 41—and five grandchildren.

It was her grandchildren—particularly a set of twins who had just been born—that were foremost in Mary’s mind in 2005 as she waited apprehensively for the result of her blood test for DM. In those weeks, Mary had searched the Internet for information about this genetic condition. She had learned that there were two types of the disease, and that babies could experience serious symptoms from a congenital variety of DM1.

“I’d been sitting on pins and needles,” Mary recalls. So when the doctor’s office called her at work, she demanded to be given the results over the phone. “Yes, you have it,” the neurologist said. “But doctor said I had type 2,” Mary said, “so then I knew the babies were ok.”

Looking back, Mary and Ed now understand that DM had probably been affecting Mary’s family for generations. They’re pretty sure Mary’s father had it—he died at 53 after years of back and leg pain, stumbling on stairs, difficulty getting out of chairs and other symptoms Mary would later experience herself. “Every surgery he came out weaker,” Mary says. And after Mary was diagnosed, a neurologist told her older brother that he too had DM. He has since died.

A few years ago, Mary’s older daughter, Tawnya, a fit, competitive runner, began experiencing sudden cardiac arrest. When she went to the Mayo Clinic in Minnesota to have surgery for the condition, she also tested positive for DM2.

“So my father and my brother had it, and now my daughter has it,” Mary says. “I’m hoping my other daughter doesn't have it and that none of the grandkids have it.”

Being Your Own Advocate

Mary’s initial response to her 2005 DM diagnosis was to try and fight the disease. “I’m not going to have muscle weakness,” she told herself. “I’m going to beat it.” She launched into a physical therapy program, but in retrospect, she says, “I think I knew then that I was pushing myself way too hard.” By then end of 2007, Mary’s doctor was telling her to ease up and to leave work—that it was just too much stress. “After she left, it took six to eight months for her to get caught up on her rest,” Ed recalls.

“Ed says I’m hard-headed, because when I can't do something it becomes a challenge – I’ve got to figure out how to do it,” Mary says. Her primary care doctor has told her, “with your disease, I think that’s probably an asset.” Like other DM patients, Mary sees a lot of doctors. In addition to her primary care physician and her neurologist, she sees a cardiologist who monitors the loop recorder that constantly tracks the activity of her heart, and a gastroenterologist for her GI symptoms. While she can't say enough good things about all of her doctors, she and Ed have had to educate most of them about her condition, which is so rare that most physicians don’t encounter it.

Which is why Mary’s cardiologist makes a special request of Ed whenever the couple goes to a Myotonic Annual Conference. “I want you to get your hands on anything you can bring me pertaining to DM.”

Even the genetic counselors who counseled the family after Mary’s diagnosis had no idea what myotonic dystrophy was, Ed says. “They had stuff they’d printed off the Internet. I think Mary informed them of a lot of things they didn't know about.” And when Mary suffered a small stroke in 2014, none of the ER doctors had any experience with DM. “It was kind of scary,” Mary remembers. “I was trying to explain DM to the doctors. Of course I was weak, but from DM, not necessarily from the stroke. You have to be your own advocate.”

In 2008, Mary had the opportunity to contribute to DM research after learning that she had cataracts in both eyes, a condition that can occur much earlier in life for people with DM. DM cataracts have a characteristic look, sometimes described as similar to Christmas tree lights. In her internet research Mary had run across a request from Dr. Jeremy Rhodes at the University of East Anglia, Norwich, who was looking for DM cataracts to study. “I would love to get your cataracts,” Rhodes told her. But what he really wanted, if there was a way Mary could arrange it, was to also get photos of the cataracts before they were removed.

Before long, Mary found herself in front of a machine at the Lion’s Eye Bank at the Eastern Virginia Medical School surrounded by doctors and students looking at the rare DM cataracts in her eyes. They sent the photos off to Dr. Rhodes and after the surgery, they gave the cataracts to Ed, who mailed them off to England. It was the first time the researcher was able to examine DM cataracts before and after removal.

A few years later, Mary and Ed encountered Dr. Rhodes at an Myotonic Annual Conference in Florida. Mary walked up to him and pointed to her nametag. “Do you recognize this name?” she asked. “Why Mary,” he responded. “I’ve been projecting your eyes on a screen here all week.”

Handy Around the House

Mary is slowing down these days. She gets more tired in the daytime, and little things can be harder to do. But Ed is a big help. “I couldn't do it without him,” she says.

A long-time hobby woodworker and always handy around the house, Ed has modified their home in ways that are very helpful to Mary while not being obvious to visitors. He’s installed extra handrails on some staircases and small pull handles on some doorframes (to help with that last step, after the handrail ends), and he has built portable half-steps that can be added to a staircase when Mary is too weak to negotiate full-height steps. And he’s become adept at boosting Mary out of chairs so elegantly that most people don't even notice he’s doing it.

But Ed’s most popular helping device are the “pinchers” he builds for Mary—and for other people who learn about them and decide they need a set. Similar to the grabbers sold in medical supply store, Ed’s pinchers are made from wood with rubber grippers and of different lengths depending on their intended use. He’s made perhaps 60 or 70 of them so far. Mary uses them to weed the garden and for dozens of other uses. “I can’t bend over anymore, but I can pick up anything with them,” she says, “my purse, a penny off the floor.” She uses them every day.