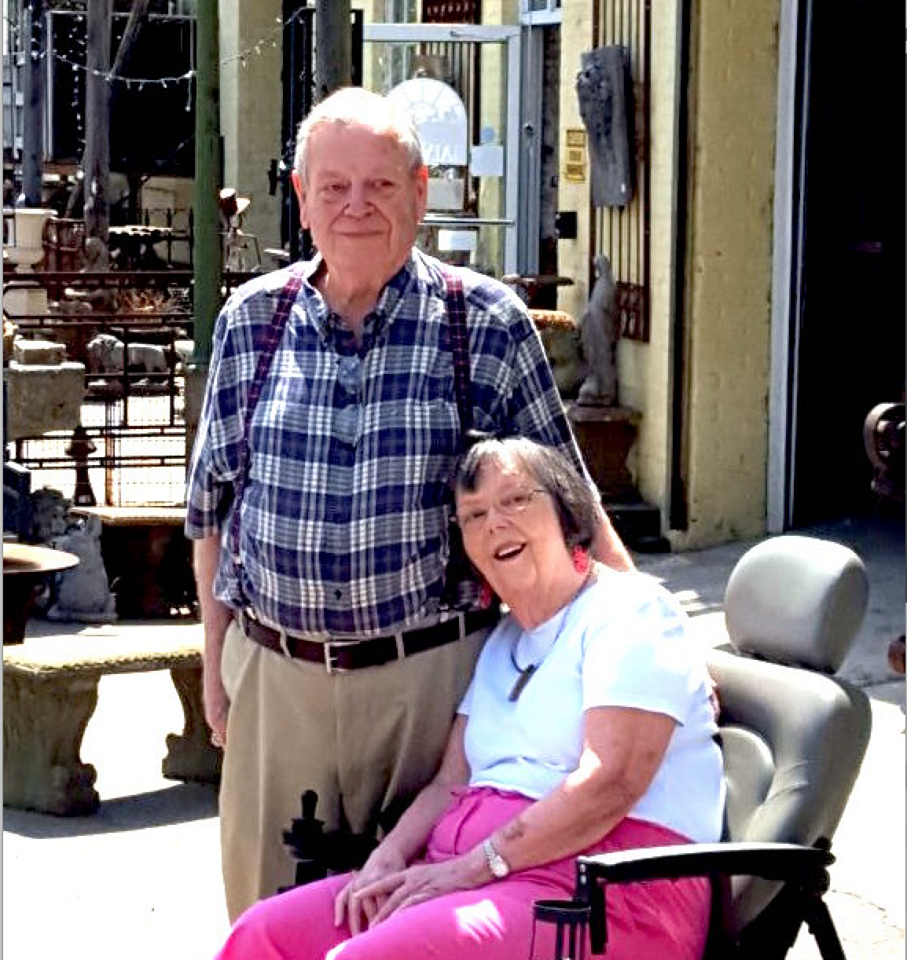 “Our friends had no knowledge of the disease,” says Lee Baker, “nor had my family. They had no idea what I was talking about.”

Until 1988, “I had no idea there was such a thing as myotonic dystrophy,” says Lee Baker, 75, an artist and former school teacher who lives in Roanoke, Virginia and has myotonic dystrophy. Lee and her husband Ralph traveled the world during his 25-year army career. Although Lee was very active, she says she “knew that things were not really right” with her health.

“One of the first things to be a problem was that my tongue would freeze up when I got nervous or emotional. It gets stiff like a board. Then my hands and feet began to do that, and I had started to fall a lot. I didn’t know what was wrong.” In her 30s, when she was teaching elementary school, Lee began having bouts of extreme fatigue that felt like the flu. She went to doctors who misdiagnosed her at various times with lupus, arthritis and fibromyalgia, and treated her with the corticosteroid drug prednisone, which didn’t help.

Then, in 1988, when she was 47, Lee received a letter from one of her mother’s nieces, who was constructing a family history. Tucked into it was an interesting sentence. “I hope you don’t have myotonic dystrophy,” it said. “Some of the members of our family do.”

Lee had known little of her mother’s family. “My mother had tuberculosis, which got worse after I was born,” she says. “So they wanted her to go out west where the air was clear and dry. My father didn’t go with her. Eventually, I was sent to an aunt and uncle in Kansas, and they raised me.”

After the letter, Lee’s mysterious symptoms began to make sense. She took it to a doctor in Roanoke, who sent her to a neurology department at a local hospital, where a “textbook case” of DM was diagnosed (although there was no genetic testing at that time).

Lee started going to the Muscular Dystrophy Association clinic in Roanoke, but there wasn’t any research going on in that part of the country. “I’m the type of person who wants to know what’s going on, why things aren’t working right, that sort of thing,” she says. Eventually, that curiosity led her to Dr. Richard Moxley in Rochester, New York.

In the 1990s, Dr. Moxley was testing troglitazone in DM, and Lee became part of the study. (Troglitazone, a drug that increases sensitivity to insulin, was later found to cause liver problems, and it was taken off the market.) “I felt like it was doing a little good, but they stopped the trial,” she said. “What I thought was neat, though, is that Dr. Moxley was willing to understand more about how myotonic dystrophy works. Whether or not that particular medicine was helpful, he learned a lot. He would come by in the evening before he left the hospital and tell me what was new, what was going on with the research. I just ate it up. I was very interested.”

The trial in Rochester was an introduction to the DM community for Lee and Ralph, but 2005 marked the beginning of their true immersion in it. That year, the 5th International Myotonic Dystrophy Consortium (IDMC-5) was held in Quebec City in Canada, and they attended it. “That was the first time we’d been to any kind of meeting,” Ralph remembers, and it turned out to be the one from which Myotonic was first launched.

Becoming part of the larger DM community through Myotonic helped the couple almost immediately. “Our friends had no knowledge of the disease,” says Lee, “nor had my family. They had no idea what I was talking about.” Even going to general muscular dystrophy events hadn’t been helpful. “I was maybe the only one in the group that had myotonic dystrophy,” she says.

Since then, Lee has been in several DM research studies, and Ralph has volunteered to be part of the control group when the opportunity presented itself. They’ve learned a lot by going to Myotonic Annual Conferences. “Just being at the conferences – it just blows my mind how much research is going on,” Ralph says.

Helping Others Help Themselves

For Lee and Ralph, the help they’ve been able to offer to other people at the Myotonic Annual Conferences has been at least as important as the help and information they’ve received. “I think in the conferences I have been a help to others with myotonic dystrophy and their families, because I am willing to talk about how it affects me, which helps them know what they might expect,” Lee  says.

She has seen families “totally break apart” when someone develops DM. It can be hard, she says, for family members to truly accept that, “you mean it when you say that you won’t get better, that you’ll get worse. Many times, it’s the children and one parent that are affected, and others that are not affected. It can be hard to keep the family together.”

One family stands out in her mind. “There’s one couple that brings their grandson with congenital muscular dystrophy to the conferences, and Ralph has kind of made friends with Grandpa,” Lee says. The child’s mother has juvenile-onset DM. “They were so stressed the first time we met them, because things weren’t going right. I think he felt a little like a fish out of water. Now we’ve seen them three different times, and we like to say we are old friends. They are truly a part of the DM community.”

She adds, “It’s partly just getting to know other people have this disorder also. You’re not alone in the fight. For the whole family, I say, ‘This is going to make a change in your life. The more you know about what’s happening with your spouse or child, the more you’ll be able to understand.’”

Expecting the Unexpected, Defining Yourself 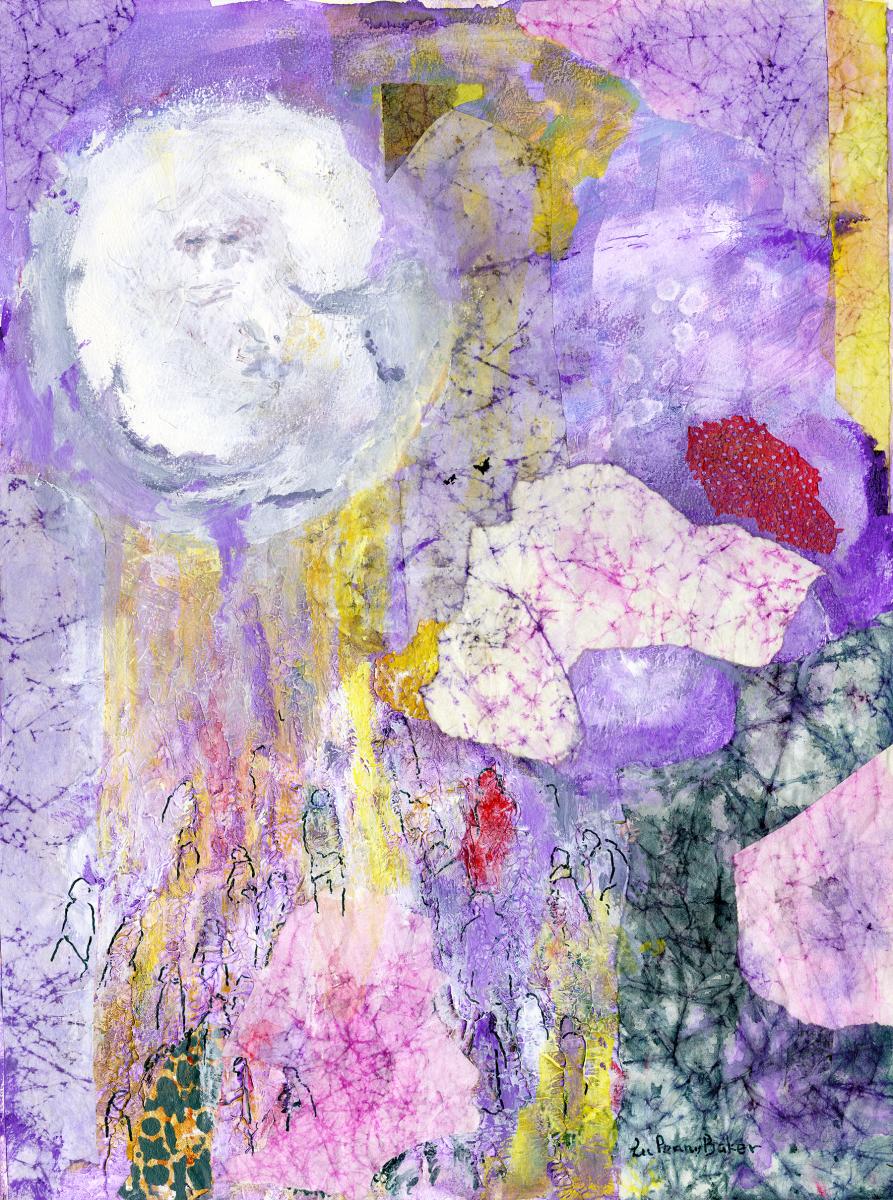 After 47 years of marriage, Lee and Ralph are preparing to take their first pleasure cruise this spring. They’ve arranged for a power scooter to be delivered to the ship and hope all will go well. They’re looking forward to the 16-day trip that will start in Miami, go through the Panama Canal and end in San Francisco.

They realize there may be some inconveniences and surprises, but they’ve learned to expect such things. “We make assumptions that we have relied on for this cruise that things will be there as they say they will, but until we get there, we won’t know,” says Lee. “That’s just part of it, but it’s a part that you don’t realize is going to be part of it.”

In addition to expecting the unexpected, Lee has lived by the principle that DM “does not define who you are,” and that’s something she’s tried to impart to others in the community.  “I am a painter,” she says. “I have a muscle problem, so I’ve adjusted the way I paint, but I keep painting. I read. You have to keep as much of your own self as possible.”

It's easy to help a family like the Bakers. Click here to support newly diagnosed families today.

It is heavily textured water color paper that is collaged with hand made papers and overlaid with watercolor and acrylic paints with a little bit of green ink.