The Fitzpatrick-Vassallo Family: A Message of Hope 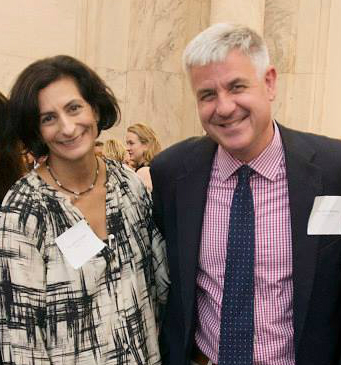 John Fitzpatrick and Kristen Vassallo remember the day their twins, Jack and Ellie, were born with mixed emotions. Ellie was born wailing and thriving, but Jack was clearly in trouble. “He came out blue and not breathing,” John recalls. “This was a surprise to the doctors and everyone there.”

The baby was resuscitated and then whisked off to a ten-day stay in the neonatal ICU, while doctors ran all kinds of tests and pondered what might be wrong with him. One night, unbeknownst to his parents, a pediatric geneticist examined Jack and ordered yet more tests. Four weeks later, long after a much-improved Jack had come home from the hospital, Kristen got a call from her pediatrician. The tests had revealed myotonic dystrophy (DM).

“It was probably the worst day of my life,” Kristen recalls, “getting the diagnosis and then asking my pediatrician, ‘Is this bad?’ and having him respond, ‘Yes, it’s bad.’”

“We had no idea about this disease,” Kristen recalls. “We did what I think most families do - we got on the internet.” This was back in 2005, before much information was available. (Myotonic was launched 2 years later, in 2007.) “What we saw were horrible, horrible images of this disease,” Kristen says, “and we really had no understanding what we were dealing with.” Within a few months, Kristen also tested positive for DM, while Ellie, Jack’s twin, tested negative.

A decade later the professional couple from Austin, Texas, have learned a great deal about DM and are active in efforts to educate others about the disease. And the message they preach from their experience is one of hope. “If we were told when Jack was diagnosed that this was where he would be ten years later, we wouldn’t have gone through the agony we experienced then,” Kristen says. While their son does have symptoms of his disease - weakness; developmental, learning, and social issues; some orthopedic problems - his life has not been devastated as John and Kristen once thought it might be.

In fact, Jack is doing pretty well. “And he is so loved,” Kristen says. “Children just flock to him. It’s the most amazing thing.”

Early on after Jack was diagnosed, his pediatrician predicted that the boy’s relationship with Ellie would be a boon to both children. “It will be good for him to have this unaffected, normal, high-achieving sibling, because he’ll always have this high bar, to be just as good as his sister,” Kristen recalls the doctor saying, “and your daughter will be more compassionate and have a better sense of the way things can work out fairly and unfairly in the world.”

Which has turned out to be true, Kristen says. “In my opinion, Jack would not be where he is now - which is doing really wonderfully - without Ellie. He’s had to keep up with her his entire life. She was an early walker, and he needed to run after her, so he figured out how to walk. And Ellie cares deeply, not only for her brother, but also for other children in the world. She sees differences in people as interesting and special.”

Ellie is protective of Jack. Kristen recalls her daughter overhearing a conversation in which she and John were discussing a new drug trial for DM and how one day there might be a cure for the disease. “What would that mean?” Ellie piped up. “I don't want Jack to change.”

“They’re best friends,” Kristen says her children, “probably more important to one another than John and I in many ways. We call them the old married couple. They fight like crazy and drive one another crazy, but they can't live without each other.”

Kristen and John try to keep in mind that while Jack has special needs because of his disease, he also has unique needs simply because he is Jack - and that Ellie has her own needs. “Ellie has had her challenges,” Kristen says, “and while you might think they were minor compared to Jack’s, they have been important to her. When they were babies we used to laugh that we had a special-needs child and a high-needs child. Every child has different ways they need you.”

Reaching Out Through Myotonic

During the tumultuous time immediately following Jack’s diagnosis, Kristen learned through her mom, Mollie McKool, that efforts were afoot to launch a DM foundation in the US. That work blossomed into Myotonic, and Kristen attended the organization’s first conference.

“Meeting people with the disease was in some ways very scary, but in other ways very powerful,” Kristen recalls. “As a mom, you spend a lot of time asking, why did this happen? And you talk with these other moms and they are dealing with the exact same issues. John and I really believe in Myotonic. It’s so powerful and so needed. Now it’s a very hopeful experience every time we go to a conference. It’s really special”

John’s involvement with Myotonic also began at a conference, where he felt the same power in connecting with fathers and husbands in DM families that Kristen had with the mothers. After a few years as an Myotonic volunteer, he joined the board of directors, where he has put to work the skills learned in a lifetime as a teacher, educational administrator, and foundation director. He has been impressed by the organization’s growth and its growing impact working toward Care and a Cure. He points particularly to the myotonic’s Fund-a-Fellow program, support for research, conferences, “and all the different efforts to give families and people living with myotonic dystrophy better quality of life.”

Back home in Austin, the couple reach out whenever they hear of a new area family affected by DM. Kristen connects with the moms, and John might invite a dad out for a beer, just to talk. Over the last few years, they’ve bonded with several other families in town, include one with twins in which one twin is affected by DM - an almost identical situation to their own.

Kristen is particularly focused on the unaffected siblings, like Ellie - believing that they should have a way to connect and share experiences the same way mothers and fathers do. Looking ahead for their own kids, the couple’s goal is for both Jack and Ellie to lead independent lives - that Jack gets the support he needs to do that, and that Ellie is able to flower in her own life without feeling responsible for Jack.

“We want our message to be one of hope,” John says. “With the kids turning ten, this is the anniversary of that first really hard year. We’ve been so much more successful - Jack has been so much more successful - than we could have imagined. We're hopeful for the future and so appreciative for all the friends and families and doctors that have helped us along the way. There really is a way to fight through this disease - to have a great family and a great life and make everything work.”