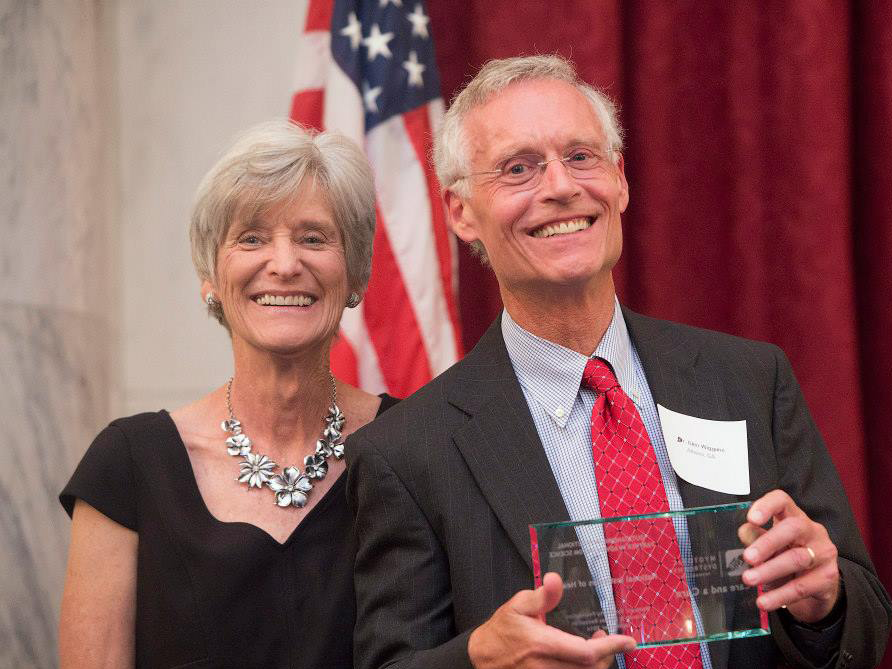 The personal essay below was written by Alex Wiggans, grandson of Myotonic community members Dr. Glen Wiggans and Marlo Wiggans.

Have you ever heard of a disease called myotonic dystrophy? Most likely not, although you probably have heard of muscular dystrophy. You might have even donated money to the Muscular Dystrophy Association and written your name on a shamrock. Myotonic dystrophy is a form of muscular dystrophy, but it is rare and not well-researched. It is a disease that few will know about. But I have to watch it take its course every day. The biggest barrier that will have a lasting impression on me is myotonic dystrophy. My father is afflicted with this horrific disease. The disease causes muscle deterioration, heart problems, breathing problems, loss of balance, personality changes, extreme fatigue, and digestive issues. My family has to work together as a team, be committed to each other, and have the courage to believe.

My family has to work together as a team to overcome barriers that other people don’t have to face. For example, sometimes my dad trips and falls. Often, when he falls, he gets injured because he cannot catch himself. The disease affects his muscles so that he is too weak to get himself up. He lies on the floor helplessly, calling for help. He can’t even pull himself up into a sitting position without help. My mom and I work as a team to lift him up. First, we sit him up, and I brace his back. We stop and let him recover so he won’t be dizzy and fall again. Then, my mom bends his knees and stands on his toes. She grabs his hands, and I wrap my arms around him from behind so I have a way to support him. She pulls, and I lift him. It’s hard to get him on his feet again because he’s dead weight. After we get him up, he leans on me for support until he regains his balance. Sometimes he falls down in public, and I fight back tears of frustration, sadness and embarrassment. Through these experiences, I’ve learned that working as a team is helpful because everybody has a job, and we all need each other to overcome challenges. We are our own support group!

Commitment is a key value in my family. My mom and I have to be committed to my dad because he can’t do what most people can do by themselves. One example of this is putting his socks on his feet. Most people can quickly put on their socks. My dad can’t put on his own socks because the muscles in his hands are so weak that they can’t grasp the sock and pull it over his foot. Every day before I go to school, I have to put on his socks (which can take awhile). Some days I just want to say, "Do it yourself," but then I remember that he can’t do it by himself and it’s not his fault. Since I love my dad more than anything else, I am completely committed to doing what he needs me to do for him.

Another important value for my family is courage to believe. The reason we need courage is to keep belief alive. My gramps is a doctor. He goes all around the world trying to find new ways to help my dad and others who are affected by this disease. Even though some doctors say there is no hope for finding a cure, I believe that the harder the doctors work to find the cure, the more they will discover about this disease. It takes a lot of courage to watch the disease take its toll on my father and to still believe they will someday find a cure for this devastating disease. One of the ways I keep my belief alive is to pray and ask God to show the doctors a way to find a cure that will be permanent and save the lives of those who have this disease. Most of the time, it takes courage to believe that there is hope.

Teamwork, commitment and courage are all part of my family’s values. Without these values, we would become depressed, angry at each other, and some of us could even give up and walk out. Some people may say that the most affected person is the person with the illness or disease. They’re wrong. The caretakers are equally affected. But with teamwork, commitment, and courage you can be strong and stand up to whatever barrier tries to block your path, even myotonic dystrophy.