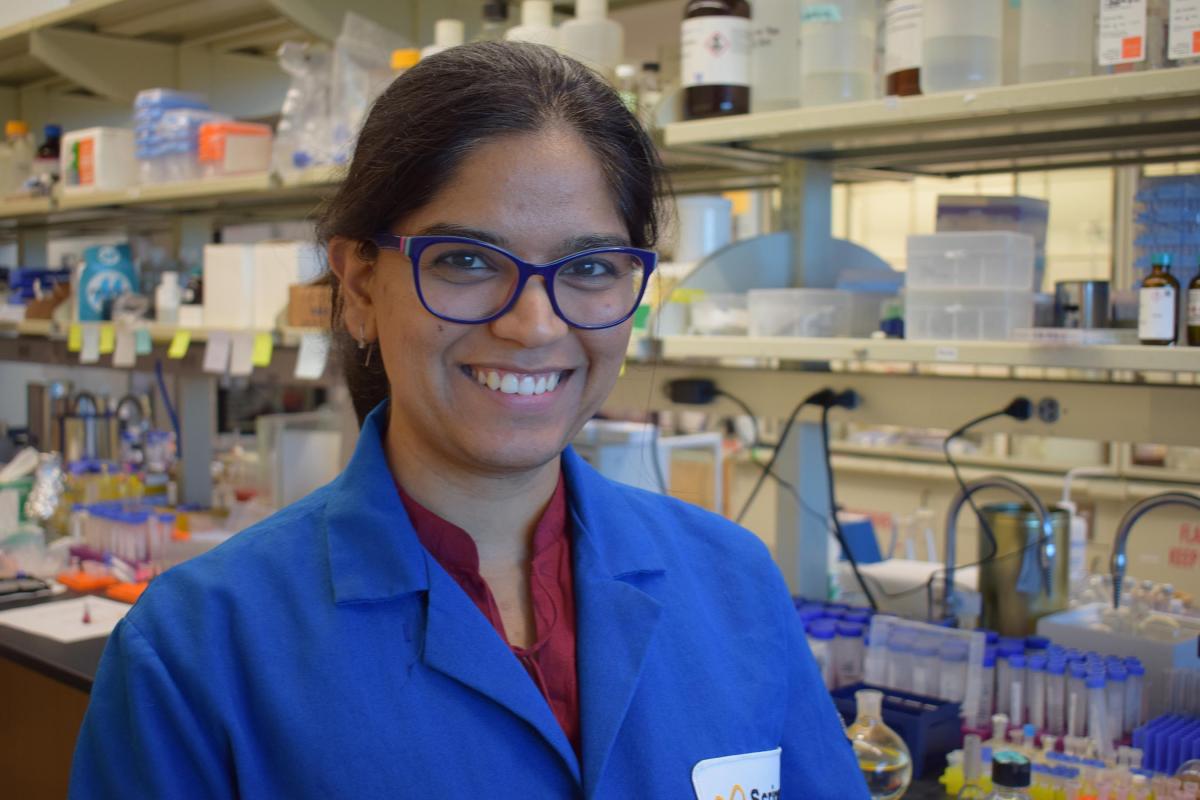 Shruti Choudhary, Ph.D., conducted doctoral work in medicinal chemistry at Duquesne University in Pittsburgh with a focus on cancer and infectious diseases, but once she had completed her degree, she decided to turn her attention to myotonic dystrophy. She felt there were plenty of disease targets, therapies, and researchers focused on cancer, and saw a far greater need to address neurodegenerative conditions. After hearing Dr. Matthew Disney from the Scripps Research Institute in Florida speak during a webinar, she applied to his lab for a postdoctoral fellowship, where she has worked since October 2017.

“My training was in chemistry and I wanted to get into a group that does both chemistry and biology,” she said. “There has to be an integration of both of these.”

MDF awarded Dr. Choudhary a 2019-2020 Fellowship to support her work in the Disney Lab exploring a potential therapy for DM1. The fellowship, awarded in conjunction with MDF UK, will provide two years of funding plus travel stipends to allow her to attend the annual MDF and biennial IDMC conferences.

The Disney lab has long worked on myotonic dystrophy and has identified certain small molecules that bind to RNA in a highly selective manner. They believe these molecules can be used to disrupt the disease process underlying DM1. Dr. Choudhary's work involves optimizing small molecule candidates to enhance their properties as potential therapies before putting them into in vitro (in a test tube, culture or otherwise outside a living organism) and in vivo (in a living organism) testing. She is modifying them to confer properties that would enhance their potential as drug candidates that could begin human clinical testing.

People with DM1 have what is known as a triplet repeat expansion in the non-coding portion of the DMPK gene. The gene codes for the production of myotonic dystrophy protein kinase, which is believed to play a critical role in muscle, heart, and brain cells. The expanded number of repeats in the DMPK gene results in the production of toxic RNA that also has an expanded number of repeats. Though it is normal for people to have a repeating piece of genetic code in both the DMPK gene and the resulting RNA, people with DM1 have an abnormally large and unstable number of repeats. Those repeats in the RNA bind to muscleblind-like proteins, master regulators of RNA, and prevent them from carrying out their normal functions.

The Disney Lab has hit upon a novel strategy to counter the ill-effects of the toxic RNA by appending small molecules that bind selectively to it, along with a nucleic acid-cleaving molecule part that cuts the disease-causing portion of the RNA and removes the toxic piece of code so proper cell activity can be restored.

“I am trying to see if I can make the structure smaller,” said Dr. Choudhary. “If the structure is smaller it will have better pharmacokinetic properties. That’s what I’m doing with this project right now.”

Small molecule drugs have traditionally been designed to bind to proteins, but Dr. Disney believes it is possible to develop small molecule compounds capable of binding to RNA, a novel strategy that provides new ways to approach a wide range of diseases.

Dr. Disney is a co-founder of Expansion Therapeutics, which was formed in 2016 to discover and develop small molecule drugs that target RNA. It secured $55.3 million in initial venture funding to conduct discovery and development of drugs focused on repeat expansion disorders with a lead program in DM1 and second one in discovery for DM2.

This is Dr. Choudhary's second attempt to become an MDF Fellow. Her first application was not selected, which made the notification that she had been selected this year much more exciting.

“It’s a huge honor and a huge responsibility,” she said.

The Myotonic Dystrophy Foundation (MDF) received applications from doctoral students and postdoctoral scholars from institutions all over the world for the 2022 MDF Research Fellowship Program.

MDF is off to an exciting start to 2022! We hope you will join us for our annual community-wide events. Mark your calendars for Rare Disease Day, DM Family Day, the MDF Annual Conference, International Myotonic Dystrophy Awareness Day, and our biggest fundraising event of the year, the MDF Gala.